At least 2 Tawny Owls in garden last night just after midnight both calling.
A quiet day out today, several Swifts and Swallows cruising over farmland and House Martins closer to the village.


A lone Kestrel hunting by the Lees and a single Lesser Black-back Gull flew SE.
Blackcap, Whitethroat and Chiffchaff were the only warblers heard in full song but some brief snatches of song from Sedge and a Reed Warbler.


Water levels in the streams and ditches are very low at the moment.
Just Speckled Wood, Small Whites and Orange Tip Butterflies seen today and a few Large Red Damselflies.

A Great-spotted Woodpecker and a Treecreeper in the garden this evening. 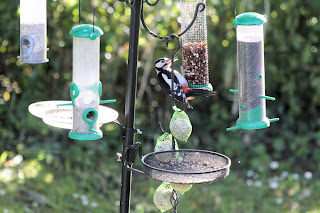 Posted by Oxonbirder at 16:59 No comments:

I know this is not Cholsey or even the UK,  but illegal hunting in Malta still goes on in a big way. Hunters flout Maltese and EU laws on protected bird species.


The largest flock of White Storks ever recorded in Malta shot at from several different locations, as the birds sought overnight shelter in Malta. At least six the 200-strong flock of storks were seen to be shot down, while another injured stork was recovered but had to be euthanized by a vet. Another two injured storks were recorded in flight with dangling legs and missing feathers. A shot Glossy Ibis, another rare migratory bird for Malta, was also received by Birdlife from Zabbar.
The flock of 200 White Storks arrived in Malta on 18 May. The Birdlife Malta office immediately informed the police and mobilised its field teams to monitor the birds and ensure their safety. A hunter was reportedly apprehended by the ALE after shooting one of the Storks in Madliena, and another was apprehended by the ALE in Zurrieq with two dead storks.


The flock eventually flew towards the Luqa airport area and two groups roosted at Ta’ Kandja and Zurrieq. Birdlife Malta teams, the ALE and two MEPA environment officers watched over the birds until they roosted in the evening. Birdlife Malta, joined by 9 local volunteers, maintained a watch through the night on the two known roost sites at Ta’ Kandja and Zurrieq.
During the night watch, both teams heard distant shots coming from other areas. A member of the public reported an injured stork in his field in Zurrieq. The protected bird was recovered by Birdlife and taken to an independent vet. However, it had to be euthanized due to substantial gunshot injuries, including an open fracture to wing and a fractured leg.


On the 19 May morning, Birdlife volunteers recorded several shots on the birds that left their roosts and at least one other Stork was shot down. The team also filmed another Stork with a dangling leg, consistent with typical gunshot injuries.
“The sighting of White Storks is a reason for joy in many countries around Europe as they are one of the most majestic species that represent the phenomenon of bird migration. Yet, in Malta their appearance causes enforcement officials and bird watchers to rush to their vehicles to protect them from the brutal hunting we witnessed over the last 24 hours.” said Nicholas Barbara, Birdlife Malta conservation and policy officer.


“Despite the efforts of our teams, the police, and MEPA’s environment officers at least seven storks were killed. Some of the birds are still flying over Malta and if they do not continue with their journey but decide to spend another night, we fear that more might be slaughtered.,” continued Barbara.
Birdlife Malta calls on the Office of the Prime Minister to significantly increase minimum penalties for illegal hunting, and permanently revoke licenses for all serious hunting and trapping contraventions, as this scenario repeats itself in the Maltese islands every single migration season.


This post was written by Birdlife Malta - who has written 10 posts on Birdlife Community. Birdlife comprises more than 100 conservation organisations working together to promote sustainable living as a means to conserve biodiversity.
Posted by Oxonbirder at 18:20 No comments:

Arrived at the Morning Star at 03:50 to await people participating in the dawn chorus at Cholsey Marsh. Whilst waiting I heard a Tawny Owl calling and a Skylark singing. Eventually 5 people arrived and we then made our way down Ferry Lane to the marsh.
Halfway down ferry lane a Cuckoo was singing, this was then a feature for the whole stay. The Cuckoo was very vocal, singing virtually all the time moving from one place to another.
Picked up virtually all the regular species and got very good views of Grasshopper Warbler around 20m away.
Tony Rayner had around 8 people in his group and got 27 species including 5 species our group did not have, Sparrowhawk, Yellowhammer, Red-legged Partridge, Mistle Thrush and Corn Bunting. They made their way through the Rec into the meadows and the bottom of Cholsey Hill.
44 species recorded on the marsh walk and most had a a good breakfast at the new “4 Teas cafe” in the village.

Thanks to all who participated.
Posted by Oxonbirder at 14:37 1 comment:


The garden was a hive of activity this afternoon, many young birds around being fed by adults.


Moorhen heard from the brook and 2 ♂ Mallard and a ♀ popped in for one of their usual visits.


A Sparrowhawk zipped thru and Buzzard, and several Red Kite overhead.


At one point, there were 8 Blackbirds in the garden, 5 adults and 3 young also 3 to 4 Song Thrush, at least 2 were recently fledged young birds and several Mistle Thrushes active in the meadow and settling in the trees in the garden.


One of the adult Song Thrush had found a cache of snails and was breaking them open on an exposed tree root.


2 Robins feeding in the garden, not sure where they are breeding yet.


Both Blue Tit nests still active and a family group of at least 5 Great Tits present. A Treecreeper put in a brief appearance along with a ♂ Great-spotted Woodpecker.


The Rookery next door has quietened down a fair bit with hopefully most of the young fledged. Carrion Crows still present and Jackdaws and a Magpie overhead.


Greenfinch, Goldfinch, Chaffinch still present, and all possibly breeding nearby.


Chiffchaff, Blackcap and Goldcrest all singing nearby and Yellowhammer and Whitethroat heard a little further away.


A Grey Squirrel present, at least 2 Hedgehog last night and a small bat briefly, probably a Pipistrelle (a little early?). 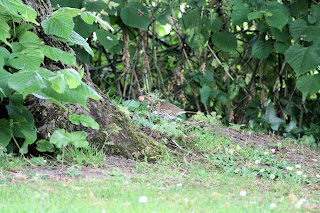 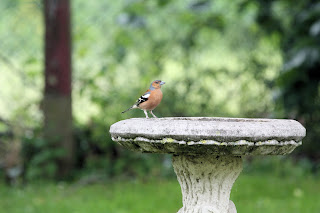 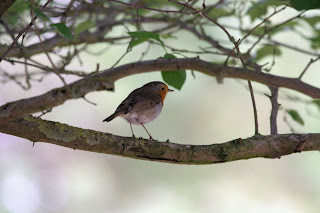 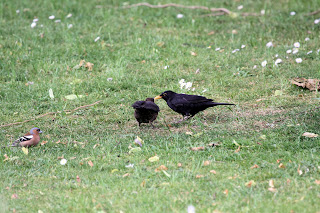 Blackbird feeding young
Posted by Oxonbirder at 17:22 No comments:


A rather quieter day than recently. Spring migration is all but over now as our summer visitors settle down to breed. Now’s the time for wandering rarities to turn up! Yeah, dream on!
The lack of spring rain contributed to the lack of wader species being seen as the usual areas that flood by the Thames are very dry.


2 pairs of Blue Tit breeding at Marymead both with young in the nest.


Nearly every field of Oil seed rape has a singing Reed Bunting in.
5 pairs of Yellow Wagtail from Lollingdon Hill to Cholsey Hill.


6 singing Corn Bunting, 3 Lollingdon and 2 Cholsey Hill and 1 in between.


1 Roe Deer seen (actually only its ears above the crop it was in). 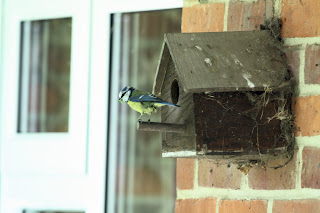 One of the two pairs of Blue Tits breeding at Marymead
Posted by Oxonbirder at 18:37 No comments:

Amongst many events taking place in Cholsey over the next few weeks 2 are associated with bird watching.
Dawn chorus, Saturday 21st May.
2 Meeting points.
The Forty at: 04:00 to be led by Tony Rayner.
The Morning Star 04:00 (Cholsey Marsh), to be led by Paul Chandler.
Cholsey Bird watch, 28th May – 5th June.
You are invited to take part in Cholsey’s own Bird watch. Just spend one hour of your time during the week and note down how many birds visit your garden, or maybe the Millennium Wood or the Rec.
Forms available from Cholsey School or on line for you to complete with how many species and numbers you have seen.
Thank you.
Posted by Oxonbirder at 14:33 No comments:


2 Mute Swans, several Canada and 3 Greylag Geese on the river, a couple of the Canada Geese had goslings with them also several Mallards some with young.
3 to 4 Great Crested Grebes along the stretch of river next to the marsh.


Red Kites, Buzzards and 1 Sparrowhawk overhead and a Kestrel hunting.
2 Grey Heron in the vicinity.


A distant Lapwing was the only wader seen and a distant lone gull, probably a Lesser Blackback.
A brief view of a Cuckoo in flight but could not relocate it, 2 Kingfishers along the river and several Great-spotted Woodpeckers seen carrying food.


As rain threatened up to 12 Swifts, 30+ House Martins and c20 Swallows were feeding over the area on several occasions.
2 Pied Wagtail carrying food on the opposite bank.


Several Jays on the opposite bank.


Linnet, Greenfinch, Chaffinch, Goldfinch, Bullfinch, Yellowhammer and 6 to 8 singing Reed Bunting present.
57 bird species noted on or around the marsh.


12+ Banded Demoiselles and 3 Common Clubtails seen along with 4 Butterfly species.

After the driest April on record, House Martins are having a hard time not finding enough mud for nest building. How can you help? 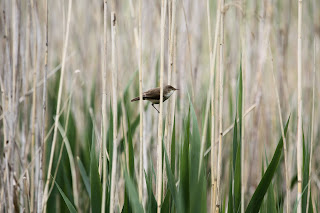 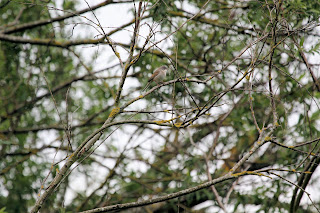 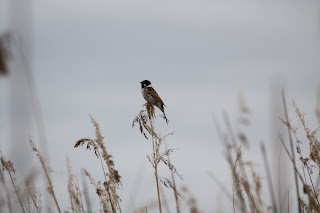 Reed Bunting
Posted by Oxonbirder at 22:08 No comments:


1 Hobby, near to one of last year's breeding sites.
2 Kestrel, probably breeding as they saw off a Buzzard that got too close. 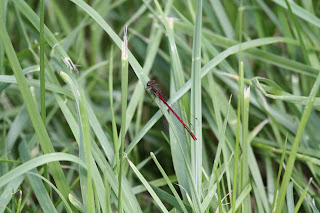 Large Red Damselfly
Posted by Oxonbirder at 18:27 No comments:

Cholsey Marsh at Dawn, 6th May.


Approx 12Km walk 10:00 – 16:00
67 bird species, seen/heard
4 Grey Heron, 2 along the Thames and 2 on farmland (streams) to the west.
Buzzard and Red Kite prominent, 1 Sparrowhawk and 3 Kestrel.
Both young of Coot and Moorhen on the river now, with several Moorhens breeding on the farmland streams.
Only 1 Lapwing seen and the fields they are probably breeding in was being patrolled by at least 4 Carrion Crows!
Tawny Owl heard at 04:30 this morning.

Hedgehog is another regular visitor
Blackcap and Chiffchaff singing nearby daily. 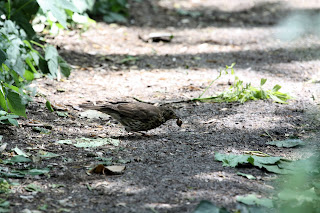 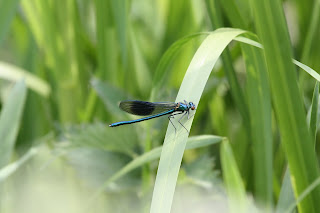 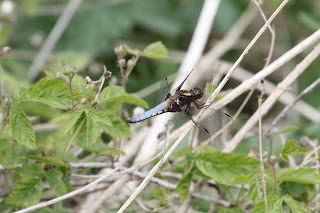 Posted by Oxonbirder at 20:05 No comments:

A walk around the farmland west of Cholsey this afternoon produced
1 Garden Warbler, 18 Whitethroat, 1 Lesser Whitethroat, 2 Yellow Wagtail.
A steady trickle of c30 Swallow + 2 Swift all moving in a northerly direction.
also a Fox seen. 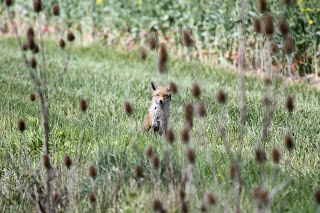 Posted by Oxonbirder at 09:36 No comments: