A couple of hours on Lollingdon hill between thunder storms, a Redstart heard calling from the hedgerow leading south towards the A417 and seen briefly, also at least two Chiffchaff along the western hedge and some young Linnet.
At one point there were 4 Buzzard, 5 Red Kite and a Kestrel over the hill.


A large flock of Rook with some Jackdaws feeding in the pig fields at the moment (c400) and approx 200 Lesser Blackback Gulls seen in the area.
A Nuthatch heard at the week end in the trees in the garden (new species for garden) but not seen and TW has had a family party of them visiting his garden recently over several days and they then move off in to the meadow that backs on to my garden so hopefully I could expect to see them soon.


Lots of butterflies around today also, Meadow Brown, Gatekeeper, Large, Small and Marbled White, Brimstone, Peacock, Small Tortoiseshell, Small Skipper, and Common Blue, TW also had a Holly Blue today in his garden and I had a Large Emerald moth roosting in the garden on Sunday.
Also a few Grass Snakes around in various places (per BH & TW).


A couple of Magpie managing to sneak in to the garden recently! 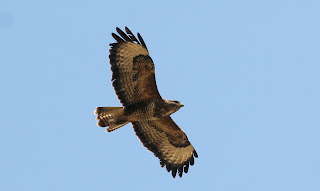 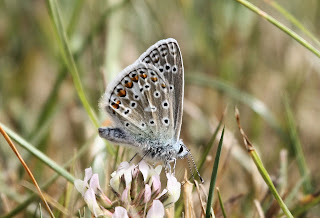 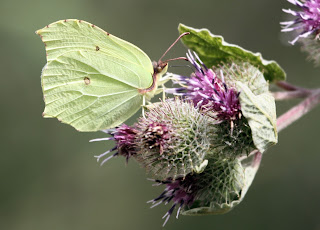 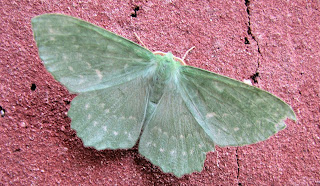 The last few days have been warm and sunny, with temps touching 30º at times and very little wind.


Lollingdon hill yesterday was quiet, only a Yellow Wagtail of note collecting food  amongst the Sheep, the usual Corn Buntings, Yellowhammers and Linnets present.
Today a Lesser Whitethroat singing north of Cholsey Marsh, a Garden Warbler seen and a couple of Kingfishers, also around twenty Swallows on wires near the end of Caps Lane, mainly young and still being fed by the adults, probably about three broods worth.


Unusually two Magpies in the garden this morning, the local Crow must have been otherwise engaged as he did not appear to chase them off! Also two Treecreeper present for a time on the Lime Trees, two Mallards, four Moorhens and a Great-spotted Woodpecker still regular visitors.
Lots of butterflies around today with Meadow Brown and Gatekeeper being the most numerous, Small Tortoiseshell, Large and Small Skipper, Marbled, Large and Small White, Comma and Speckled Wood. 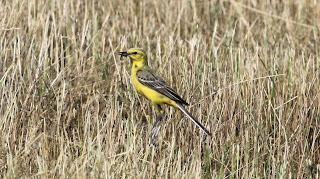 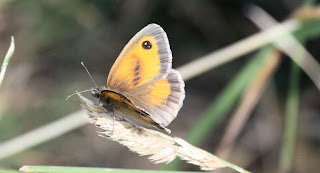 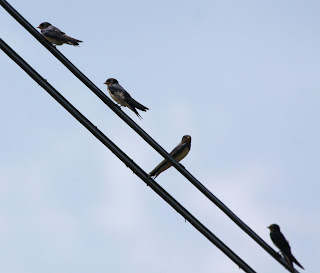 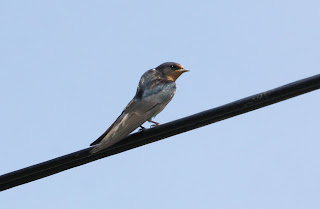 Posted by Oxonbirder at 23:01 No comments:


Spent a few hours enjoying the sunshine on Lollingdon hill today, just watching and listening.
A meadow being cut for hay was attended by several quartering Red Kite and a Buzzard that just sat at the field edge waiting for anything to appear that maybe edible and a Kestrel hunting Grasshoppers on the hill.


Two young Robins in the garden this week and all four Moorhens around, they are certainly characters and have been spending a lot of time in the garden as some sort of sanctuary as they rarely get disturbed and can rest, preen and feed at ease.
Only one House Martins nest at Marymead again this year and two Tawny Owls in the garden tonight.


The Moorhens in the garden 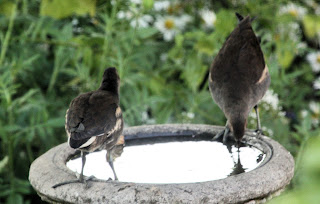 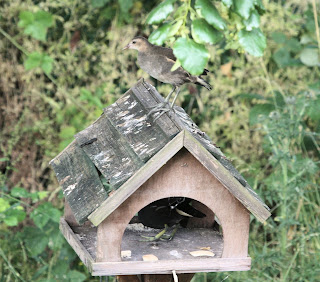 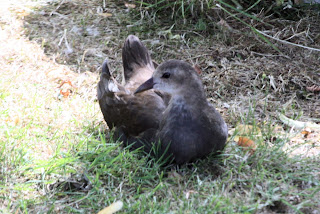 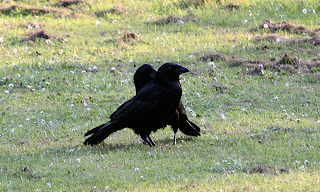 Crows bonding session in the meadow

Posted by Oxonbirder at 02:12 No comments:


A walk out around the farm land and Lollingdon hill today, nothing unexpected and little of note.
Around half dozen Corn Bunting still in song, two Yellow Wagtail seen and a Hobby.


I was alerted to the presence of the Hobby by a Swallow alarm call, I looked around and eventually saw the Hobby coming towards me in the distance, and how the Swallow saw it I do not know as it must have been well over a kilometre away when it gave the alarm.
The garden has been quite active recently with a visit of a Green Woodpecker, both male and female Great-spotted Woodpecker and four Moorhen (2 adults and 2 young) and plenty of visiting finches. 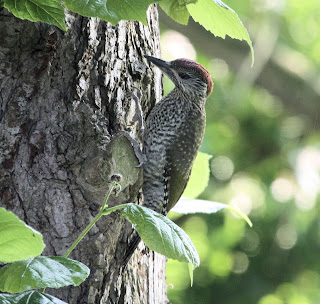 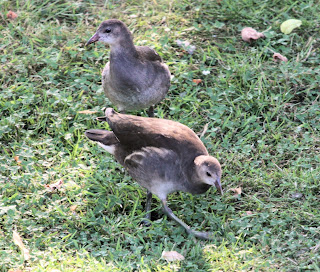 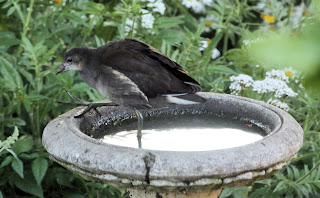 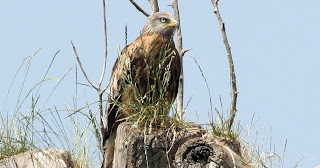 Red Kite
Posted by Oxonbirder at 23:11 No comments:


A fair old walk today in brilliant sunshine to Wallingford then back along the river, bird wise fairly quiet. A couple of Nuthatch on the other bank of the river heard calling and two Jay near Bow Bridge, a couple of Kingfisher seen and Cholsey Marsh was rather quiet also. Reed Warbler, Sedge Warbler, Blackcap, Whitethroat, Garden Warbler and Chiffchaff all seen and heard, a couple of Cormorant flying down river and three Black-headed Gull feeding along the river.
Plenty of butterflies around today, Marbled White, Large White, Comma, Small Tortoiseshell, Large Skipper and a couple of Common Blue, only dragons seen were Banded Demoiselle. 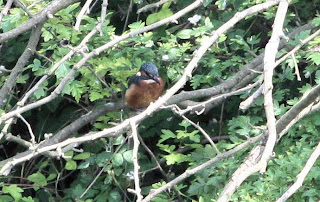 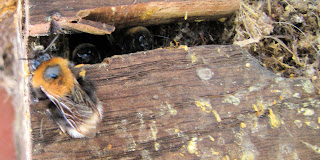 
I wondered when this one would turn up, the young Moorhen finally arrived up in the garden today, initially with one of the adults but then has been around by him/her self. Also some young Chaffinch, Goldfinch and Greenfinch being fed in the garden today. 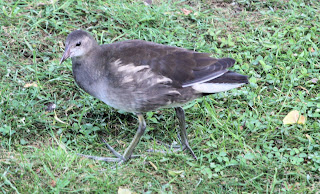 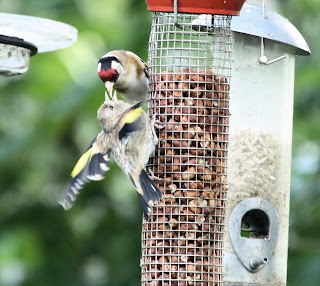 Young Goldfinch being fed by adult 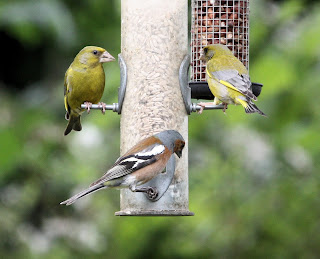 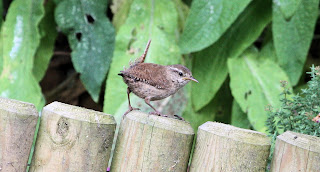 One of the garden Wrens
Posted by Oxonbirder at 21:30 No comments:


A pleasant walk out west today but quiet, Chiffchaff and Blackcap still singing well but otherwise fairly quiet, the “acros” along the reedy stream were generally quiet but a few seen carrying food so hopefully quite a few young soon to be seen and three sites with singing Goldcrest.
Three young Song Thrush seen near Lollingdon hill and a flock of around a dozen Long-tailed Tit.


A lot of Small Tortoiseshell butterflies today and Speckled Wood and Meadow Brown but only one White (large). 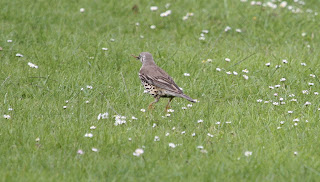 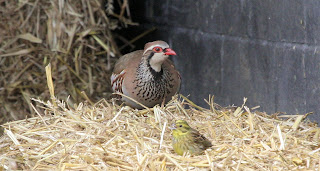 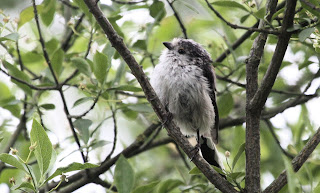 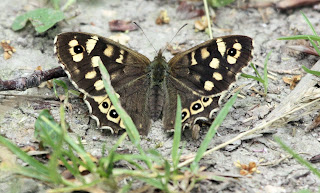 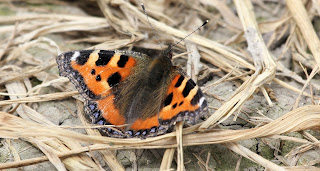 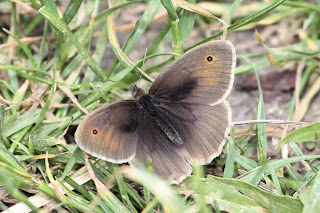