Two pairs of Little Owl in Cholsey at the moment with one pair to the east of the village and another to the west and at least one suspected of breeding.
A Hobby hunting at Lollingdon hill today and several Red Kite and Buzzard in the vicinity, also four Grey Partridge around the hill. Yellowhammers, Corn Buntings, Skylarks, Yellow Wagtail and Whitethroats all appear to be doing OK around the hill and all noted carrying food.


A Lesser Whitethroat in song along the Wallingford straight and several Quail heard nearby on the downs.
Both ♂ & ♀ Great-spotted Woodpecker visiting the garden recently and both Moorhen in the garden regularly and an almost full grown young seen in the meadow and up to three different Hedgehogs feeding in the garden.


A few Banded Demoiselles near the Thames, a ♀ Broad-bodied Chaser and a Common Darter briefly, Large Skipper butterflies on the wing over a flower meadow and Small Tortoiseshell around but few other species and no Ladybirds noted this year yet! 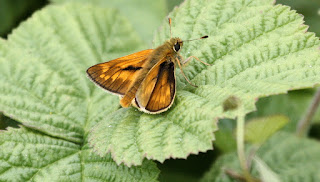 Posted by Oxonbirder at 23:33 No comments:

Another warm and muggy day, cloudy with sun later, 22º.


A visit to a site in the east of the parish to look for some Orchids and the following two species found (thanks to Tony Williams for the info). 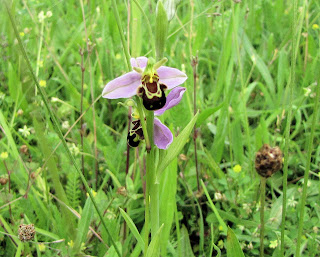 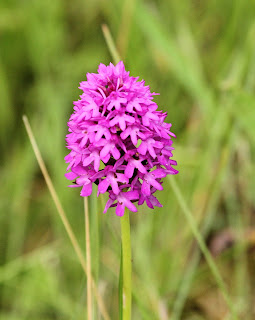 Pyramid Orchid
Posted by Oxonbirder at 17:09 No comments:


A walk out west threw up no surprises, Yellowhammers, Reed Buntings and Corn Buntings in song and still quite a few Whitethroats, Blackcap and Chiffchaff singing and a single Garden Warbler. The “reedy stream” and the “long dyke” had both Reed Warbler and Sedge Warbler singing.
Two sites with Goldcrest singing and a family of at least five Wrens noted.


Buzzard, Red Kite, Hobby, Kestrel and Peregrine all seen.
Very few butterflies with Speckled Wood being the most abundant and a single Ringlet noted.

Yellow Iris and some Orchids in flower.


Two Lesser Blackback Gulls over Wallingford town centre this afternoon calling.
Two Moorhen in the garden this morning, maybe the young are big enough to leave unattended in the brook now? 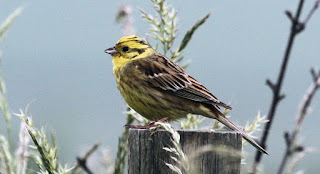 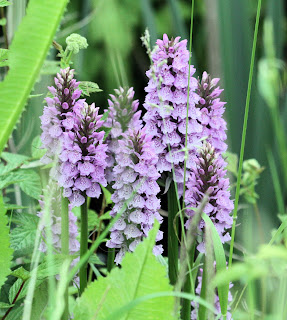 Posted by Oxonbirder at 23:00 No comments:

Quiet on all fronts.


A few visits to Lollingdon hill and very quiet just the local breeding species present and the odd Swifts feeding overhead and the occasional Lesser Blackback Gull over.
Three pairs of Whitethroat breeding on the hill and several seen carrying food.


Cholsey marsh rather quiet also.
Sparrowhawks breeding near Marymead but no House Martins breeding this year at Marymead although several nearby and a Cuckoo again near the Bullshole and heard from the garden.


Very few butterflies and dragonflies seen recently down to the weather I guess as it’s been a bit cool and wet.
Some Bee Orchids and Pyramid Orchids are flowering in the east of the parish at the moment. 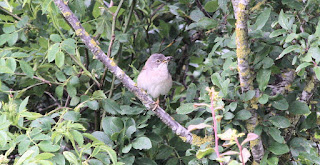 One of the Whitethroats carrying food.


Still a bit blowy and a couple of hours on Lollingdon hill today mostly spent in one spot as shortly after I arrived I began to see Swifts passing over and moving south and in 90 minutes I had counted over two hundred passing over, I did wonder if it was a smaller flock doing several circuits but I was watching them disappear from sight over the downs still moving south, four House Martins also with the flock. An unusual movement?
Hobby, Kestrel, two Buzzards and a Red Kite around the hill.


A Cuckoo heard several times near the Bullshole by Jane Dawson today.
A Jackdaw came in the garden again today and alighted on one of the fat ball feeders and within less than 5 seconds the Crow (who was approx 100m away in the meadow) immediately took off and headed towards the garden, the Jackdaw left in quite a hurry with the Crow in hot pursuit behind him. 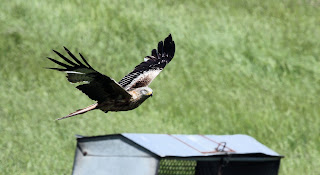 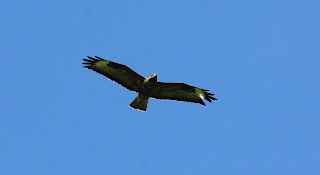 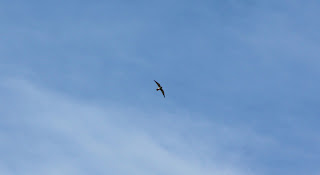 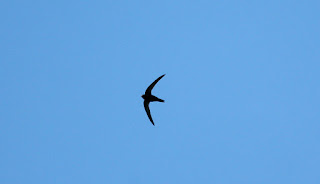 
Very blowy on Lollingdon hill today and not much around, a few Red Kite and a single Kestrel on the hill but I would think most of the small stuff was sheltering from the rather strong wind, two Grey Partridge around and Swallows and Swifts feeding low along the hedgerows.
Some success and failures today as one of the young Blackbirds was found dead in the garden this morning, no obvious signs of trauma and did not appear emaciated so not sure why!


The Great Tits have young (3) and have been active in the garden for the past few days now along with a Blue Tit family and the Goldfinch family still present Song Thrush, Moorhen, Mallards and Stock Doves still feeding in the garden. 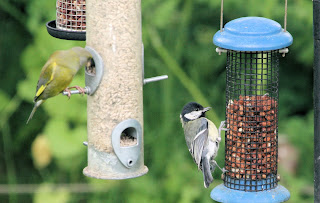 Posted by Oxonbirder at 23:57 No comments:


I had a meeting this morning and on my way home I was passing Lollingdon hill so I thought I would drop in for a brief visit as it was only a fine drizzle but still enough to get wet though.
I had got about 100m along the path when I noticed a few Carrion Crow diving on something on the ground and generally creating, the grass was fairly long and I could not see what it was. My initial thought was a ground predator but all of a sudden a large black bird lifted off followed closely by two others, Raven!


The three Raven flew off hotly pursued by a couple of Carrion Crow and the size difference was very noticeable, then another Raven joined them from over the hill and all four settled about a 500+ metres away on a fresh manure heap and at that point the Crows returned to their initial location and settled down. The Ravens stayed for about 10 minutes and then flew off towards the downs.
Four Jackdaw feeding in the garden until routed by the local Crow, it’s his “corvid” domain so he chases off any other crow species but a delay with this lot as they spent a good 10 minutes here and one of them was fairly adept at getting on to the feeder that held some suet balls.


Also a family of Goldfinch around but the young have not sussed out how to use the feeders yet so the adults get mobbed when they move off with the young begging for food! Young Blackbird also in the garden.

Ravens in the rain 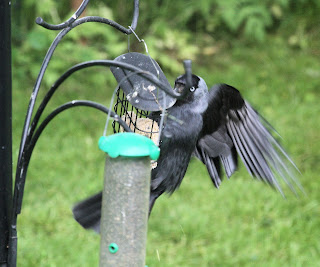 Jackdaw on the suet ball feeder 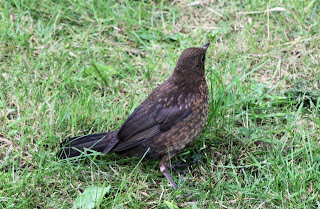 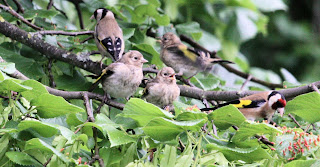 Email ThisBlogThis!Share to TwitterShare to FacebookShare to Pinterest
Labels: Raven

Yellow Wagtails and a Turtle Dove


For the past few weeks I have been trying to track down breeding pairs of Yellow Wagtail and so far have found seven, possibly eight pairs in the parish.
Providing all the pairs breed successfully this would be a good number for the area and I will continue to monitor them.


All pairs are in very similar habitat of cereal crops and one pair so far seen carrying food suggesting young present.
Have been visiting Lollingdon hill on a daily basis for at least an hour on each occasion but it has been rather quiet, the only birds of note were a Kestrel present and a rarity of a Turtle Dove that flew north over the hill today. 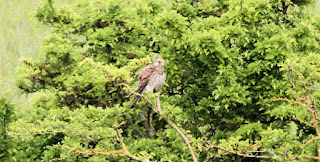 Posted by Oxonbirder at 21:00 No comments:


Arrived back from Oxford just after lunch time and decided to sit in the garden and enjoy the sun, after a couple of minutes I became aware of a Sedge Warbler singing, walked to the other end of the garden and one was singing along the brook that runs alongside. The first time I recall one there as it is a busy area with a footpath one side and a school the other.
Later I decided on a walk out to Lollingdon, relatively quiet but approx six Blackcap in song, a Goldcrest and a pair of Yellow Wagtail near the hill, three Black-headed Gull flew north over the hill and another Sedge Warbler singing along one of the streams that runs through Lollingdon.

Posted by Oxonbirder at 00:07 No comments:


Some antics in the garden today with the Moorhen becoming quite dominant, it has discovered the bird table and has managed to get on to it with some accurate flying as it has a roof, also is using the bird bath frequently (even though the brook is less than 100m away) and successfully tackled a Wood Pigeon that wanted to get to it!
A visit to Lollingdon hill for a couple of hours did not produce much, again a few Swift feeding around the hill and a ♂ Peregrine seen hunting and disappear behind the hill in a stoop.

Several butterflies again, Holly Blue, Orange Tip, Small White, Brimstone, Small Tortoiseshell and what looked to me like a Southern Hawker dragonfly but would not keep still long enought to be positive. 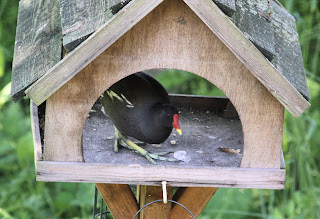 Unusual visitor on the bird table 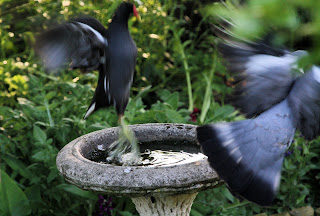 Seeing off the Wood Pigeon 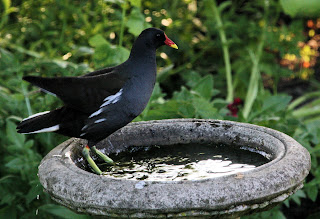 A few missing this year.


An early visit to Cholsey marsh this morning was a chilly start to the day with the temp down to 4º and a heavy mist over the river and surrounding banks. Lots of birds singing with ten Wren, fourteen Sedge Warbler, four Reed Warbler, five Whitethroat, four Chiffchaff, six Blackcap, four Garden Warbler, one Chaffinch, six Blackbird and five Reed Bunting. There were more Sedge Warbler further north along the river bank and two Lesser Whitethroat also. Two Song Thrush singing on the opposite bank along with some more Sedge Warbler (approx thirty in total) and Green and Great-spotted Woodpecker.
Disappointed there is no Grasshopper Warbler or Willow Warbler (apart from transient birds earlier in the spring) this year on the marsh and the Cuckoo is a very erratic visitor this time also. The marsh is still quite wet for this time of year but whether this is a reason I do not know. Also no Bullfinch heard or seen so far in the usual breeding spots.


Later in the day a visit to Lollingdon hill produced a few Swift feeding over the hill and a Great-spotted Woodpecker flew across the south face only to return a few minutes later carrying food.
Whitethroat, Linnet, Yellowhammer and Corn Bunting present also.


A ♀ Broad-bodied Chaser seen on Lollingdon hill and five species of butterfly. 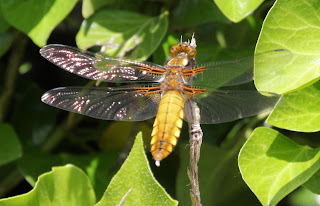 
A walk out west today to the local farmland and Lollingdon, some of the fields were being cut for hay and were being quartered by up to ten Red Kite and several Buzzard. The Buzzards were always at a higher altitude than the Kites and one was seen hovering on several occasions.
Skylark, Whitethroat, Linnet, Reed Bunting, Yellowhammer and Corn Bunting in fair numbers and several Reed and Sedge Warbler along the “reedy” stream.


Two Grey Heron in a stretch of one of the streams that runs through the area and several Stock Dove noted.
Two pairs of Grey Partridge seen and two pairs of Yellow Wagtail in the area, Goldcrest heard singing in the millennium wood and Cholsey churchyard and both Green and Great-spotted Woodpecker heard.


A couple of small Swift flocks feeding over the farm land and Swallow and House Martin frequent between Manor farm and Marymead.
A Lesser Whitethroat in song in a hedgerow in Lollingdon, Chiffchaff, Blackcap and Garden Warbler seen.


Lollingdon hill has been quiet over the last few days with only the local breeding species present so spring migration has probably ceased, however with birds still appearing on the south coast (i.e. Portland had over one thousand Spotted Flycatchers and fifty Wheatear on Saturday) there may still be birds moving through! 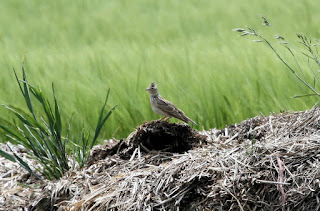 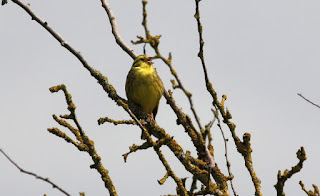 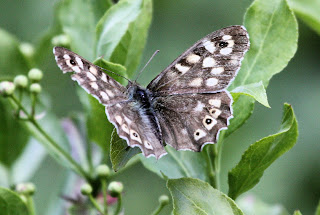 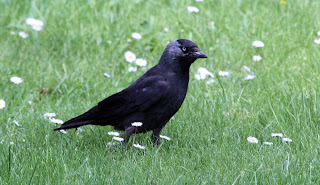 Jackdaw
Posted by Oxonbirder at 23:00 No comments: