After two Jays in the garden yesterday, several more seen today, two or three near the four arches, four at Bow Bridge and two plus south of Lollingdon hill.
Chiffchaffs still frequent also, three on Cholsey Marsh, two at Bow with a largish (c40) tit flock and another two on Lollingdon hill.


Cholsey Marsh also produced a flyover of five Siskin and a flock of fifty Starling feeding in a nearby field.
The tit flock at Bow bridge consisted of twenty plus Long-tailed Tit and the rest Blue and Great Tit, two plus Goldcrest and a Treecreeper.


Several Bullfinch present and a Cormorant near the river.
Other than mentioned above, a single Goldcrest on the north side of the hill.


Approximately one hundred and fifty Lesser Blackback Gull feeding in a field being worked by a tractor.
Very light hirundine passage today!


Red Admiral, Large and Small White, Small Tortoiseshell and Speckled Wood all seen and quite a few Migrant Hawker and Common Darter noted. 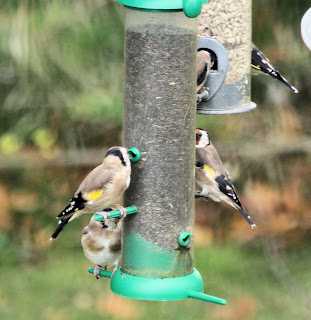 Some of the garden Goldfinch