Love is in the air!


Sunny, 8º, light S.
We were just commenting on how quiet the hill was today when 2 Raven appeared over the brow and performed what I believe was an amazing courtship display lasting for around 20 minutes before both heading off towards the Downs. Most of the time their flight was synchronised (knock the socks off the Red Arrows) with climbs, dives and various tumbles along the south side of the hill and with what looked liked food passing movements (aka harriers), they seemed to be enjoying the moment and it all appeared very playful but serious at the same time, also some low croaking noises heard frequently during the process, all in all one heck of a display.


No sign of the Stonechat today and very few Thrushes around with only a handful of Fieldfare and Redwing, 20+ Blackbird and 8 Song Thrush. A ♀ Sparrowhawk flew south, 2 Magpie, a Great-spotted Woodpecker and 2 Pied Wagtail also on the hill.
Lots of Gulls in the area by the pig fields and also a field being ploughed near Aston Tirrold, Lesser Blackback and Black-headed Gulls ID’ed, also c500 Lapwing in the area.


The Harris Hawk has been reported from Cholsey marsh again last week.
A series of photos of the Ravens, not great quality but illustrating many flight positions. Also a late Plume Moth found on the car when we returned back from the walk and a few pics of some distant Lapwing flocks in the air. 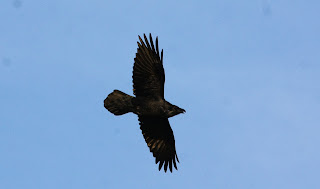 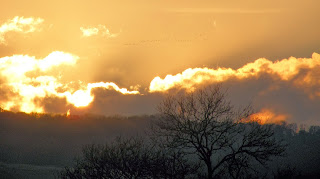 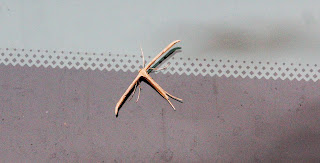