Despite the rainy weather there was a good turnout for the Cholsey-Earth Trust “Come Out & Play” event in the rec. the initial count of visitors were at least 84 adults and 166 children so thank you for coming.

A guided walk around the playing field to the Millennium Wood went well with the youngsters finding all sorts of creepies with Spiders, Wood Louse, Millipedes and various Beetles.

Tony Rayner brought along his overnight Moth catch and enlightened both young and old with a good variety of moths. Nothing spectacular but interesting none the less with August Thorn, Canary Shouldered Thorn, and Brimstone to name a few.

The Earth Trust team provided various activities for the youngsters which included a bug hunt, a nature detective trail, wild art and also materials to make their own cardboard binoculars.

2 notable finds were one initially thought to be a Lizard but later confirmed as a Smooth Newt (found by Ben) and a female Stag Beetle (unfortunately the latter was deceased). The former was released back where it was found.

Only one butterfly and one dragonfly seen: a Small White and a Southern Hawker.

A lady from the Hereford Rescue centre was also present and showed the assembled audience a couple of Polecat, a Barn Owl, a Tawny Owl and a Hedgehog all of which had been rescued.

Thank you the Earth Trust Team, The Happy Hub team, Poppy Hunt, Tony Rayner and Mark Gray and all who took part in the organisation and running of the event and especially all the enthusiastic visitors both young and older. 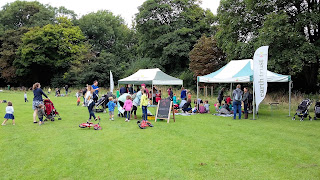 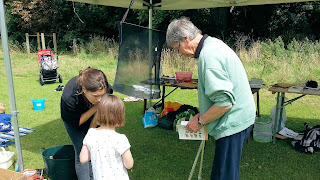 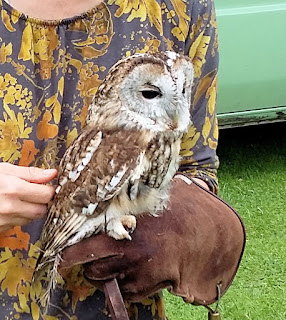