A Twitch and a Dip

A text arrived this afternoon just as Loren and I were off to the Bunkfest that changed our day.

I’ve seen around a dozen or so of these before in the UK but not one in Oxfordshire and I believe it would be a county first for this species. So off to Middle Barton we went.

Our journey took us around 50 minutes and on arrival we saw several birders milling around and not looking at anything in particular and the finder had left.

After a quick chat we ascertained that the bird had not been seen or heard since the original sighting and, correct me if I am wrong, but I was told that it was viewed without binoculars and the observer had no previous experience of Greenish Warblers.

We started to fan out around the village but after a few hours or so nothing was found so one by one we all left and called it a day. 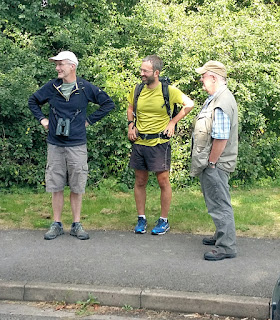 A few birders present at Middle Barton
Posted by Oxonbirder at 22:30