Moths & Corvids & How we treat Nature

A few bits and pieces from today, a Yellow Wagtail out on Lollingdon Hill and a Lesser Whitethroat heard singing nearby.

The Little Owl seen today and 2 Raven flew over headed for the Downs.

The caterpillars in question are Spindle Ermine Moth, they have been present for several years on a small area of Spindle in that section of hedge. They are native, they are not a pest and the Spindle will regrow with no problem.

There is no reason to eradicate them as they do no harm. Spindle has been co-existing with this species of caterpillar for eons and it still grows!

In fact blow torching the hedge has probably done far more damage than the caterpillars would do as the fire means the hedge will not grow back where damaged. All that has been achieved is possibly killing that bit of hedge and depriving some nestlings of some tasty grubs! Who was this ****?”

"TR has been regularly monitoring what shelters under his 30 odd reptile sheets. This year he is noticing a big decrease in the number of small mammals. It has reached the point now that he is not finding any mammals, and can only put this down to the spraying of the neighbouring farmland to clear for housing and one neighbour spraying everything in his garden.

Not surprising perhaps that our Kestrels seem to have gone."

“A pair of Mistle Thrush have decided to nest in the garden and yesterday were seen chasing off a marauding Magpie.

Since the demise of our resident Crows there have been more raids by Magpies in and near the garden whereas the Crows would keep any other Corvids at bay.

The nearby Song Thrush nest was raided by a Magpie recently and the Thrushes have not been back since.

From what we hear we believe some Crows were trapped and killed nearby thus interfering with the natural balance!”

A record of 4 Stock Dove in the garden today and one of them pushing a Wood Pigeon around, it’s usually the other way!!

Local Swift and Swallow appear to be around most of the time now but the few House Martin appear infrequently. 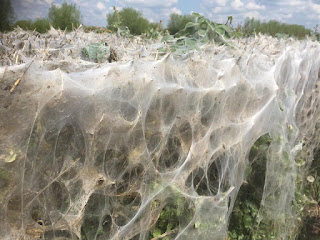 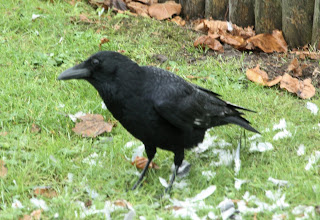 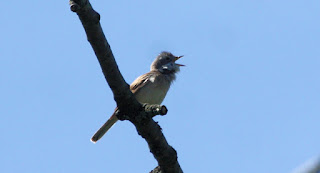 A Common Whitethroat from today
Posted by Oxonbirder at 19:30