A couple of days ago, me and my friends (Lily, Daisy and Ellie) decided to meet in the Cholsey park for lunch and have a proper catch up instead of chatting online. We were climbing trees, when Daisy spotted a very peculiar insect. At first, I thought it was a toy stuck to the tree trunk, but then it crawled across the tree. Daisy thought it was a wasp, then I soon corrected her and told her it couldn’t have been a wasp due to its size (about 3cm). We called over Ellie and Lily for them to see it. They had no clue to what it was either. I knew my Mum would know what it was because she’s an entomologist, so I ran up the mound where my Mum was sitting, and told her about our find. She came down and we showed her the insect. She examined the insect, then she said it was a Hornet. She looked at it a little closer and then she told us it was a sawfly. She took some photos then we went back home and looked it up in her book where the sawfly were. We found one that looked similar. The next day when my Mum and brother came back from tennis, they announced that it was a Hornet Moth! We looked at the sawfly that we thought was it, then spotted that that one had different coloured stripes on its bottom (its abdomen) and different antennae. A few days later, we discovered that it was actually the first ever Hornet moth to be spotted in Cholsey! 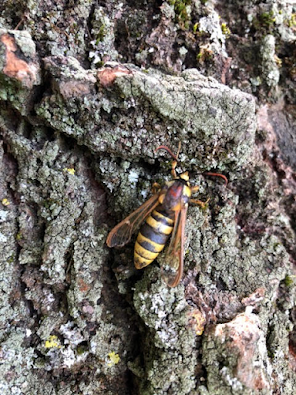 As our moth was a first sighting for this area, my Mum submitted it as a record to the iRecord website. This means it can be used by scientists to track how Hornet Moths are doing. The record tells you where and what date the moth was found and who identified it. We also tweeted the photo and so far it has got 178 likes (Which is the most likes we’ve got for a tweet). 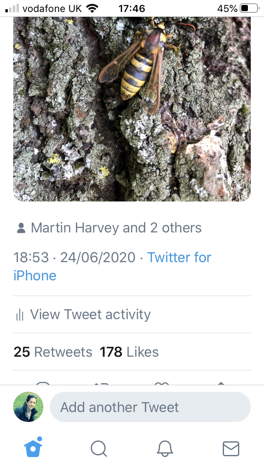 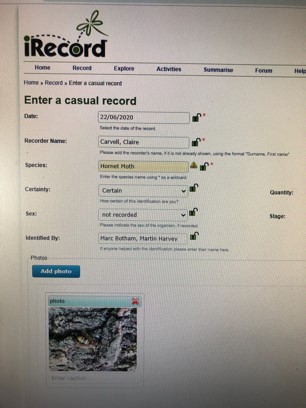 Thank you to Evelyn and Claire (Mum) for the info and photos.
Posted by Oxonbirder at 18:00