On Tuesday 26th July, a 300m + stretch of Cholsey Brook turned a bright blue. Several people alerted the Environment Agency who took samples, the conclusion they came to was that a local landscape company was tasked with taking down a diseased Horse Chestnut tree in the meadow and some chippings, leaves, and conkers got into the brook and caused a reaction that turned the water blue. The colour dissipated after several hours.


Everyone involved stated that they had never seen this before and some remain sceptical, however no environmental damage was observed and life in the brook appears normal.


On checking the internet, I came across this explanation.


“According to Wikipedia, conkers were used in the past in France and Switzerland for whitening hemp, flax, silk and wool. They contain a soapy juice, useful for washing linens and milling caps, stockings, etc., as well as fuelling (a step in the cleansing process) woollen cloth. For this, twenty conkers were enough for six litres of soft rain or river water. (Hard well water did not work!) They were peeled, then rasped or dried, and ground in a malt or other mill. The conkers were then steeped in cold water, which soon became frothy, as with soap, and then turned milky white. The liquid had to be stirred well at first, and then, after standing to settle, strained or poured off clear. Linen washed in this liquid, and afterwards rinsed in clear running water, became “an agreeable light sky-blue colour”. The process was also useful in removing spots from both linen and wool, never damaging or injuring the cloth.”

That is probably the answer.

Fortunately the concentrations in the brook were low, had they been higher and persisted for several days it would have been toxic to fish and possibly other life in the brook! 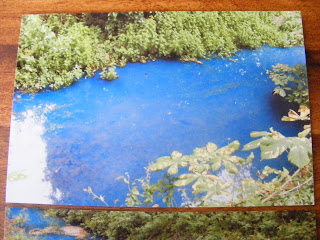 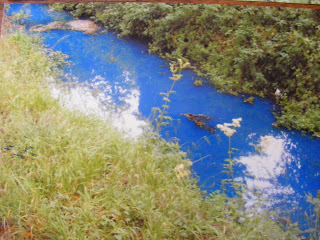 Apologies for the quality of the pics, they are a photo of a photo but you can see the colour the brook became!
Posted by Oxonbirder at 15:30