Decided to take another walk to Wallingford along the Bunk line, fairly uneventful other than roughly sixty Lapwing in a newly ploughed field and a winter thrush flock of two hundred and fifty birds near Winterbrook around equal numbers of Redwing and Fieldfare and a flock of just over one hundred Starling, also a Skylark in song today!
On crossing a bridge over a small stream in Wallingford I noticed rather a lot of fish under the bridge! Now the stream only goes in a few hundred yards coming in from the river as the other end has dried up and was built over a fair time ago. Now the water at this point was only around thirty centimetres deep if that, and there was no flow but under the small bridge there was an estimated two thousand small fish all concentrated in a small area. There was a steady movement of fish backwards and forwards from the river to the bridge and the mass of fish seemed to be quite relaxed if that’s the right word to use for their behaviour.


I made a quick phone call to Bob Wyatt who arrived shortly afterwards to view the scene and identify the fish present. Most of the fish (99%) were Roach but there was also several Perch, Bream, Chub and Dace with them, most of the fish were of a small size (less than 100 grams) with a few a bit heavier (200+ grams) but the number of them was impressive. Certainly a phenomenon I had not seen before along with quite a few others who turned up to see it. Roger Wyatt also arrived and took some photos along with me but the conditions were not good as it was either too dark or there was a reflection from the water’s surface. My son Leon and a friend of his, Darren (both fisherman) arrived and also found it a very interesting sight.

Two possibilities of why, one was predator evasion but there seemed to be no panic and they appeared relaxed in their coming and going, or they moved to clear water as the Thames is still in flood and very murky and also they do not spawn until April which would account for similar behaviour?

There was also a Kingfisher by the mouth of the stream, presumably being tempted by the quantity of fish present (but most were too big for a Kingfisher) and two Grey Wagtail put in a brief appearance.

Thanks to Bob and Roger Wyatt for their input and Rog for some of the photos. 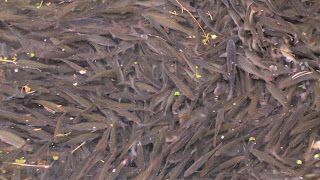 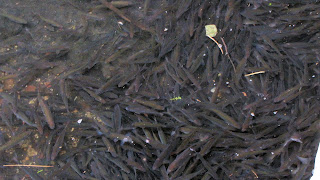 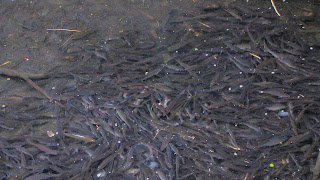 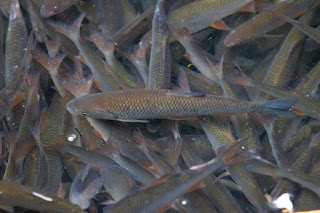 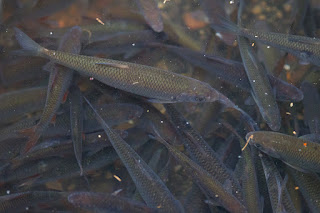 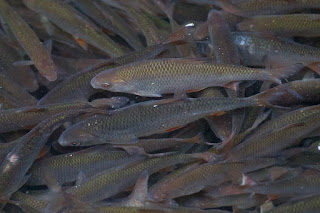 Now for some birds, some of the Starling flock
Posted by Oxonbirder at 22:00