A walk around Lollingdon and the Lees produced very much the same as last week, a lot of insects about but few butterflies.
Quite a few Stock Dove noted and one seen in display flight, a ♂ Peregrine seen flying overhead towards the village and later one heard calling but not seen, also a Kestrel.


Around a dozen singing Yellowhammer in the area spread around the various hedgerows, and with eight singing Reed Bunting and seven singing Corn Bunting the buntings appear to have a good representation in the area.
Whitethroat and Chiffchaff frequent and the odd Blackcap and Garden Warbler around, also two Yellow Wagtail.


A flock of sixteen House Martin over Marymead today with five Swallow and two Swift and more Swifts over the village
A single Lapwing seen in fields between the Fulscot bends and South Moreton today. 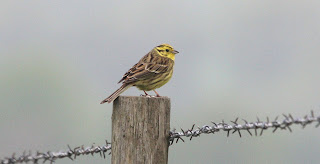 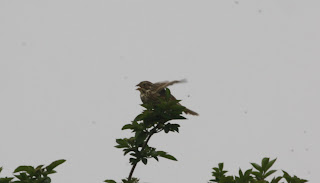 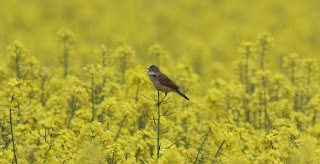 Whitethroat
Posted by Oxonbirder at 23:53