Sunny but windy and as the day progressed cloud cover, rain and wind gusting to force 8 SW, 10º dropping to 6º. The coldest May I recall here.


Land migrants were virtually non-existent today with two Willow Warbler, two Chiffchaff and a Yellow Wagtail (there were some migrants in more sheltered areas on the island).
A sea watch from the Obs was preferred as we could shelter from the wind but ventured down to the bill late afternoon and braved the wind and spray.


For the amount of time put in there was little reward, however, a Hobby in off the sea, approx ten Swift, twenty odd Swallow through, one hundred plus Manx Shearwater, one Balearic Shearwater, approx one hundred “comic” Tern, (for those who are not birders “comic” refers to either Common or Arctic Terns that are not identified specifically) two Great Northern Diver, two Whimbrel, two Pomarine Skua, five Arctic Skua, five Great Skua and many Gannet and fifty plus Fulmar.
Most of the sea birds were a fair way out and not easy to photograph in the wind! 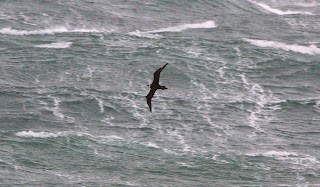 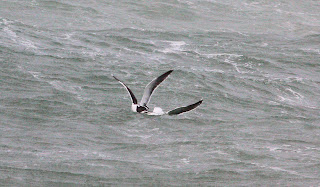 A dispute between 2 Great Blackback Gulls