A walk along the “Bunk line” to Winterbrook, then along the Thames path to Cholsey Marsh for dusk.
The “Bunk line” route was fairly quiet with a scattering of Fieldfare & Redwing, a few Song Thrush & Blackbird especially on hawthorns in the hedgerows, also a couple of both Green & Great-spotted Woodpecker and 2 Jay.


The walk along to Cholsey Marsh again Fieldfare & Redwing were frequent along the hedgerows and also a few Song Thrush & Blackbird with them.
At least 3 Kingfisher seen along with 4 Little Grebe, a Buzzard, 3 Bullfinch and a high flying Cormorant.


Also a light movement of Black-headed Gulls upriver and some high flying Lesser Blackback Gull seen.
Arrived at Cholsey Marsh at 15:00 and the first Corn Bunting appeared at 15:27 eventually to swell to 120+ roosting there this evening along with 30+ Reed Bunting.


Other species noted were 80+ Starling flew west in 3 small flocks, 21 Golden Plover flew over heading west also. 2 Common Snipe at least on the marsh along with a Water Rail, 2 Kestrel hunting the area and 2-300 Thrushes mainly Fieldfare in the area.
A ♀ Great-spotted Woodpecker in the garden this morning.

A flock of Canada Geese flying around to the east of the village tonight at 23:45.


A few pics of the Little Grebe and a Kingfisher on the opposite bank. 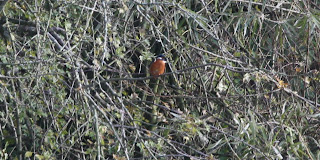