A couple of weeks ago around midday a Brown Rat appeared in the garden foraging under the bird feeders.

One of the Carrion Crows that was in the garden at that time noticed the Rat and closed on it (the male I think).

As the Crow got close he then rushed at the rat and pecked it reasonably hard on the head which appeared to stun the rat. The Crow was very wary of the Rat but attacked it several times backing off very quickly each time.

The Crow inflicted several severe wounds on the Rat, Head, rear leg and back.

From what I could see the Rat crawled off in to the undergrowth with what looked like fatal injuries never to be seen again. 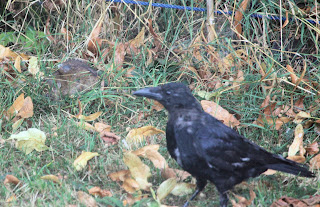