Never a common species in Cholsey, Nuthatch used to be a regular with 1 or 2 pairs back in the 70’s and early 80’s mainly in the Winterbrook area but as with so many other species disappeared from the scene.

During the next 25 or so years Nuthatch was a rarity in the village with just a handful of records.

In fact it’s never been a common species in South Oxfordshire and back in the 90’s the nearest we could find them on our annual bird race was Goring. However it is/was a regular species in some of the more wooded areas around Oxford.

That all changed in June 2014 when 1 appeared in the garden and at least 2 have been regular visitors ever since with a max of 3 on a couple of occasions in 2016.

The same ones have also been seen in gardens along Station road, Little Lane and Church road and also Whitehead Meadow and the Rec.

Whether this constitutes a comeback or not, we will have to wait but it’s good to see them on a regular basis back in the village 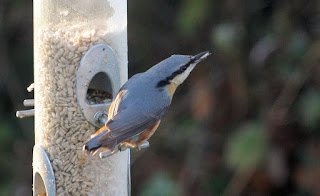