Having been working in the garden today I decided to take a break and sit down on the bench on the patio. I then became aware of a Robin sat close to me with a beak full of leaf material.

The bird was very tame as it was only a couple of feet away and I initially thought it was injured. It just sat there as if waiting for me to do something. After a couple of minutes it flew up to a shelf unit on the patio and disappeared behind an empty flower pot and then it dawned on me that it’s nesting there or at least building a nest.

Robins are usually tolerant of people being present close to the nesting area but still need to keep any disturbance to a minimum now.

A little early as they generally start in March but have been known to start as early as January and in a successful year can have up to 5 broods.

Nuthatch, Treecreeper, Coal Tit, Long-tailed Tit and Great-spotted Woodpecker in the garden today and a Goldcrest along Church road. 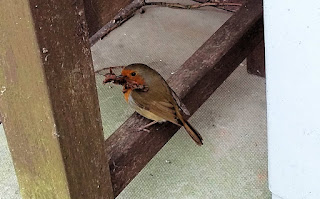 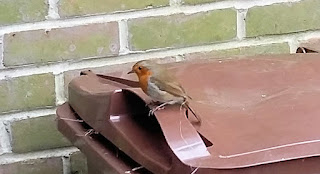