I awoke at dawn on Sunday and could hear a Song Thrush in song not too far away. Later in the day it appeared in the garden and hopefully will winter here.

A Red Kite swooped into the garden this morning and took what remained of yesterday’s Wood Pigeon from the Crow that was still eating it at the time. 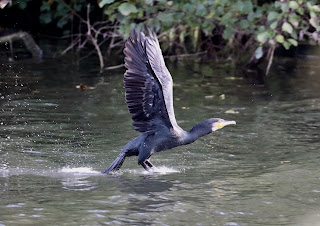 Some Cormorant action on the river by Cholsey Marsh yesterday.
Photo courtesy Alan Dawson.
Posted by Oxonbirder at 21:00