A juv White-tailed Eagle reported flying over Cholsey Church a short while ago pursued by 6 Red Kite. The bird was heading south and more than likely one of the birds from the Isle of Wight release scheme.

17th Sep:  It has been confirmed from sattelite data that the White-tailed Eagle on Sunday was one of the juvenile birds from the IOW scheme. Ring no G393. 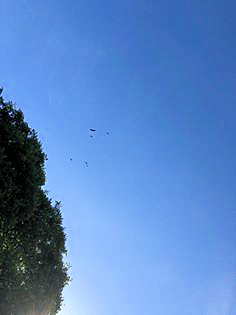 A pic from a mobile phone shows a large bird and several small birds (Red Kites). Thanks to Claire Humphreys for the photo.
Posted by Oxonbirder at 13:00