4 Arches – Cholsey Marsh – Bow Bridge - Winterbrook
Showers, 12º. River running a bit higher, faster and murkier.
Some of the fields that are flooding appear to be attracting gulls, so far only Black-headed Gulls, approx 200 along with 50+ Rooks and 20+ Jackdaw.
Up to 80 Canada Geese in same area.
A few Starling flocks seen today, these are not very frequent along this patch. 50+ Redwing seen but no Fieldfare today and 1 Song Thrush. Several small flocks of Siskin and Goldfinch flyovers and 4 Greenfinch. Good numbers of Blue, Great & Long-tailed Tits and 2-3 Reed Buntings.
5 Grey Heron, 3 Great Crested Grebe, 5 Tufted Duck, 20+ Mallard and 6 Cormorant.
I am assuming that Cormorant numbers are down because the river is somewhat murkier and flowing faster than usual and as Cormorant are visual hunters their vision would be impaired?
Also seen 3 Great-spotted Woodpecker, 4 Bullfinch, 3 Jay and 2 Pied Wagtail. 3 Buzzard, 7 Red Kite, 1 Kestrel.
A Kingfisher at Bow Bridge again.
The damp and milder conditions at the moment appear to be causing some Fungi to fruit with some fungii found (possibly Velvet Shank) and also some Turkey tail seen. 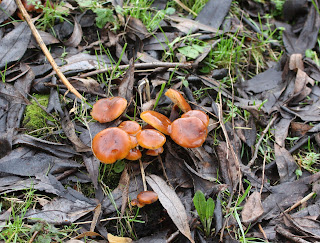 3 Mistle Thrush in Brook Meadow today and one in song for most of morning.

Just looking at my notes for January 1981 in the same area and had Lesser-spotted Woodpecker, Tree Sparrow, Merlin, Redpoll and 200 Corn Bunting at Cholsey marsh roost. How things change!
Posted by Oxonbirder at 16:17