Rain showers today prevented much photography as water and cameras do not mix well. However the few sunny spells allowed some.


Sedge Warblers are still singing on the marsh along with a few (2) Reed Warblers, (3) Whitethroats, (2) Chiffchaff and (6) Reed Buntings.


2 Kingfishers active along the Thames by the marsh and a couple of Pied Wagtails feeding on the opposite bank.


Whilst sheltering under a Blackthorn hedge during a rain shower I realised I was sharing it with a pair of Bullfinch that did not seem too concerned with me being there, also Linnet, Greenfinch, Goldfinch and Chaffinch seen close by.


The Mute Swan pair still has 4 cygnets and they have moved upriver about a kilometre and a small flock of Canada Geese on the river near Bow Bridge.


Grey Heron seen and a couple of Great-crested Grebes but no young!


Quite a few Swallows, House Martins and Swifts feeding along the river, possibly feeding on the mayflies that were on the wing.


The only dragonfly seen was one Banded Demoiselle. Several butterfly species around included Small Tortoiseshell, Large and Small White and a few Large Skippers.


In addition, an Orchid found but not sure of ID, I think it is a Pyramidal Orchid - Anacamptis pyramidalis


Tracking Cuckoos to Africa – The BTO has attached tiny radio transmitters to 5 adult male Cuckoos in East Anglia with a view to tracking their return to their wintering areas in Africa.


Adult Cuckoos leave breeding areas earlier than their offspring who are still developing with their adopted parents. 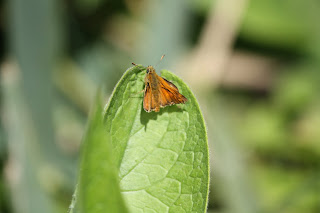 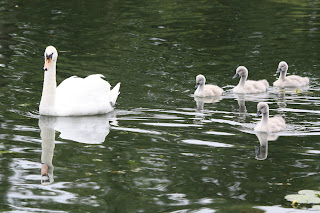 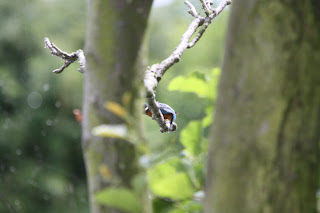 All I could get of a Kingfisher 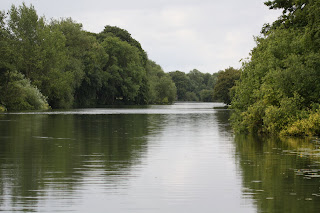 View of the Thames looking down river from Bow Bridge