*(in a tree by the brook there’s a song bird that sings).
The Moorhen still has at least 2 young with her seen in the brook that runs along the meadow. Coal Tit and Goldcrest heard on the other side of the meadow.


As I got into the farmland, Yellowhammers became apparent with around 5 to 6 singing in total. Several Whitethroats (4), Blackcaps (3) and Chiffchaffs (3) also 2 to 3 pairs of Yellow Wagtails in the area.
Singles of Hobby and Peregrine Falcon seen.


Lollingdon hill had 2 singing Corn Bunting and a few Linnets and around 4 Swallows and several Swift flocks feeding over the hill, including one flock of approximately 50 Swifts.
43 species seen.


2 Roe Deer seen resting along the edge of a field of wheat.
A Small Skipper butterfly seen along with quite a few Small Tortoiseshell, several Meadow Brown and both Large and Small Whites.


Tawny Owls heard nearby in the meadow last night and the 2nd pair of House Martins are busy rebuilding the nest at Marymead. 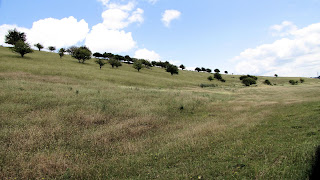