Decided to stay on Portland today and have a more relaxed day checking the “top fields”, “Culverwell” and the Obs garden.
The day started at dawn with the usual movement overhead of mainly Yellow Wagtails (14), a few Grey (6),  “White” Wagtails” (4) and Tree Pipits (6, including two in the top fields) followed by a passage of Hirundines (that lasted most of the day but petering out around 16:00.
The garden produced a Firecrest that stayed around for most of the afternoon and another (or the same bird) at Culverwell in the evening.
A few flyover waders today included three Ringed Plover, a Common Snipe, a Dunlin and a flock of sixteen Greenshank.
Other species noted was a flyover Siskin, five Spotted Flycatcher, two Pied Flycatcher, a Reed Warbler, two Lesser Whitethroat, two Redstart, three Whitethroat, a Grasshopper Warbler, two Chiffchaff, fourteen Willow Warbler, twenty plus Wheatear and two Raven.
A very brief view of what I believe to be a Nightingale but only seen for around two seconds flying away from me, appeared quite Rufous on the back and tail and the wings less so!
Several raptors around included two Buzzard, two Sparrowhawk and two Peregrine. When up in the top fields I heard a rushing noise quite close to me that was the male Peregrine whooshing past me at a distance of about 5 metres and attempting to take a Linnet but he missed!
A Great-spotted Woodpecker seen at Culverwell.
The Bottlenose Dolphins were off the East Cliffs this afternoon and three Balearic Shearwater flew west late in the afternoon.
A recent influx of immigrant butterflies and moths was noticeable today with many Red Admirals, Painted Ladys and Silver Y moths.
Apologies if this is a bit of a ramble but feeling quite knackered tonight! Yeah, OK what’s new! 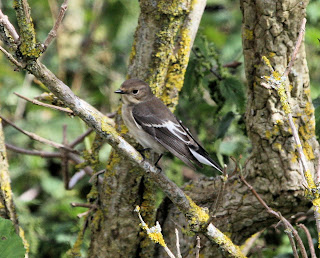 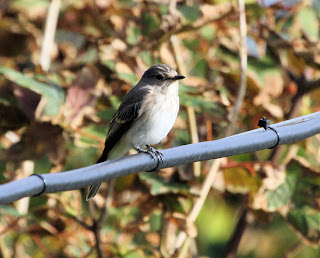 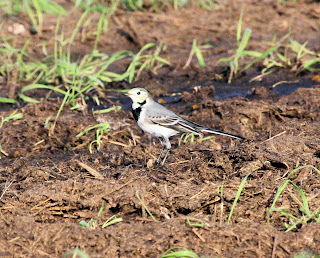 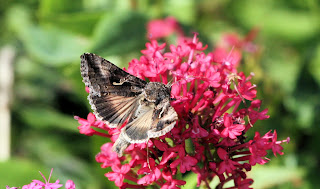