The river Thames running quite fast and the footpath very muddy today, a Teal flew from Cholsey marsh and headed down stream and there was at least two more on the marsh but hidden from view most of the time. Two Water Rail heard and several Reed Bunting present, five Bullfinch in the Sallows on the marsh and a tit flock of around thirty birds moving through and crossing the river. A Sparrowhawk soaring over the marsh and a Kestrel hunting there, a single Jay along Ferry rd and several Redwing and Fieldfare present in the taller trees. Twenty to thirty Siskin and twenty plus Goldfinch feeding on the Alders along the riverbank.
Bow Bridge turned up two Blackcap and a Chiffchaff along with another tit flock with a few Goldcrest amongst them, more Siskin heard overhead and a Cormorant on the river there.


A few more Fieldfare (hundred plus) on Lollingdon hill today along with a handful of Redwing and two Mistle Thrush, around six Blackbird on the north side and a flock of twenty five Linnet feeding in the top field.

A few small Starling flocks in various spots around Cholsey.
Tony Williams had four Brambling in his garden yesterday, but not present today.

I would just like to take this opportunity to publicly thank the Doctors, Nurses and Paramedics in the cardiology dept of the John Radcliffe hospital in Oxford where I spent several days at the end of last month for their care and understanding, lifesavers! 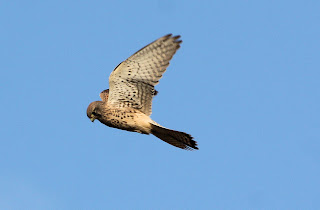