A single Lapwing seen flying from near the Bullshole towards Cholsey hill and may have joined a small flock on the other side of the hill in the flooded fields at South Moreton.
Around a dozen Tit flocks noted today between ten and thirty birds in each flock
(Long-tailed, Blue, Great and Coal Tit, plus Goldcrest (20+) ).


Winter Thrushes quite widespread now, Fieldfare in the majority but also good numbers of Redwing and approximately one hundred Blackbird noted, small numbers of Song and Mistle Thrush seen also.
At one point along a track in Lollingdon, a flock of thrushes came whooshing past me low and fast alarm calling and disappeared in to the trees behind me. On looking up to where they had come from I saw a ♂ Merlin flying through, it did not look like he was on the hunt but I guess the thrushes were not taking a chance!


Again, several small flocks of Starling seen, also a single Jay, several Meadow Pipit and Skylark and the odd Buzzard and Red Kite. A good flock of House Sparrow around Manor farm and Siskin also heard in a few places.
Two Stonechat also seen but were not allowing a close enough approach for a decent photo unfortunately.


Tony W has seen several Common Snipe recently in some of the flooded fields locally and also the Lollingdon Little Owl.
Two Coal Tit visiting the garden regularly this week.


A rather late Common Hawker dragonfly and a Peacock and Small Tortoiseshell butterfly seen today! 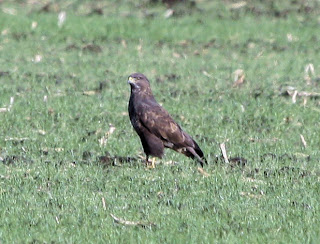