Several hours spent on Cholsey Marsh today clearing rubbish, a lot plastic in particular had been brought down river by the floods and deposited along the marsh but a fair bit had previously been dumped by various visitors over the summer. We focussed more on the northern stretch as the other end I had been clearing over the last few months when accessible.
Thanks to Tony Williams and Andy from the village council who helped and we filled 14 large sacks with mainly plastic and glass bottles and cans but also a litter bin and a fire extinguisher collected.


Some of the rubbish exposed by the floods was dumped by fisherman, boat visitors and picnickers and people emptying their cars, you can usually tell by the type of litter left.
Having mentioned fisherman I would say that most do not leave litter but there are some who have no respect for the environment who do!


Maybe we should get some remote CCTV down there!
As for birds this morning there were around thirty Common Snipe on the marsh, several Water Rail, two Chiffchaff (one in song), two Grey Wagtail and two Swallow flew through and a few Siskin in the Alders and a Jay.


A visit to Lollingdon hill after did not produce much other than two singing Corn Bunting.
Blackcap still visiting the garden and feeding on apple that I put out for the Thrushes and a Coal Tit singing nearby. Two Brambling being seen in a Cholsey garden. 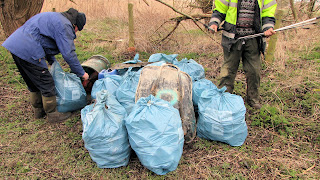 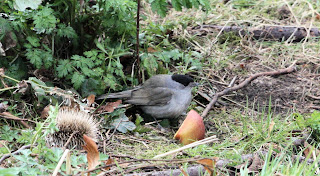