Gulls and a Pallid Harrier (nearby).


Out birding today along the Bunk railway and the Thames path, later Cholsey Down, Lollingdon Hill, Churn and Blewbury Down.


Chiffchaffs were frequent today with over a dozen seen/heard, 7 Grey Partridge and the usual Red Kites and Buzzards. Cholsey Marsh had a few Reed Buntings present and a steady passage of Hirundines, 20+ Swallows, 40+ House Martins and 4 to 5 Sand Martins, also 2 Jays.
3 Yellow Wagtails at different locations.


Whilst walking along the river I got a text to say there has been a Pallid Harrier on Blewbury Down (not far from Cholsey). An extremely rare bird in Britain yet alone Oxfordshire.  (This species normal range is southern parts of eastern Europe and Central Asia).


This bird was found and photographed by Roger Wyatt at around 10:00 this morning and confirmed as a juvenile Pallid Harrier (Circus macrourus).


I went on to Cholsey Down and Lollingdon Hill, as I knew other birders were covering the area to the west. Later went to Churn where I joined other birders but unfortunately, the bird was not seen again and presumably, it was a fly through although I feel the area will be searched tomorrow. I left at dusk with Geoff Wyatt. This represents the first record for Oxfordshire for this species.


Whilst on Lollingdon Hill, the field to the south of the hill was being ploughed and was attracting a large number of Gulls. Therefore, I decided to systematically look through them to see what was there.


Around 400 Gulls, most being Lesser Blackback Gulls but also included 2 Herring Gulls, 20+ Black-headed Gulls, 1 Common Gull, 1 Greater Blackback Gull and 2 Yellow-legged Gulls. Nearby but distant were around 500+ gulls in the pig fields and other fields at the foot of Cholsey Downs with gulls moving between areas most of the time.
In addition a Sparrowhawk flew west.


3 Roe Deer seen, a Banded Demoiselle and a Migrant Hawker.

Tawny Owls again in the garden this evening. 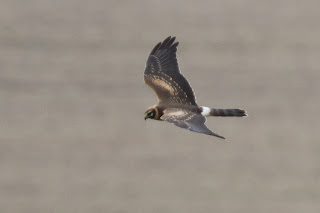