Stayed on Lollingdon Hill for around 4 hours today, nice and sunny and the wind has dropped, also a few decent species seen.


A Meadow Pipit heard shortly after arriving, and then a small flock of 8 went over making 9 in total. This species is passing thru at the moment, some will stay but most will head for the coast or further south to the continent.


A deep croaking call drew me to look for a Raven, which promptly appeared over the hill from the north, it spiralled quite high before tumbling down to almost ground level and then flew off towards Lollingdon. Around an hour later 2 appeared and flew off towards the Downs.


2 Kestrels on separate occasions flew over the hill and a Hobby drifted east, a ♀ Peregrine flew SW and appeared to have most of her tail feathers missing.


5 Red Kite and 2 Buzzards around the hill area.


8 Corn Bunting flew thru and headed for Cholsey Downs and a handful of Yellowhammer on the hedgerow to the west. The hedgerow on the east side had a Willow Warbler and 2 Chiffchaff there.


18 Goldfinch and a single Pied Wagtail flew SE over the hill.

On the hill were 2 Wheatear and a Whinchat. 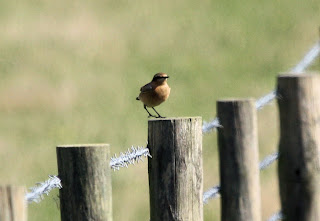 One of todays Wheatear 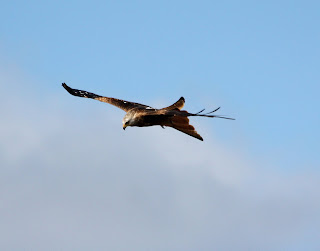 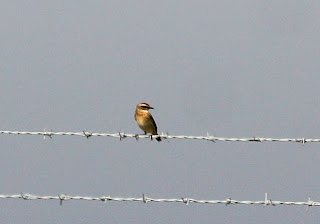 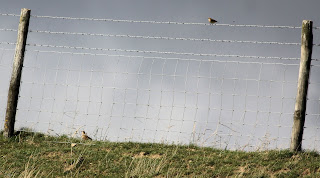 Wheatear (below) and Whinchat Little Stint @ Farmoor over the week end.
Posted by Oxonbirder at 17:43