Warm and sunny, 24º, light S. A distant thunderstorm seen to the west!


A mid morning visit to Cholsey Marsh, 8 Warbler species seen/heard and a Cuckoo roaming around the marsh, 2 Willow Warblers still singing, one on the marsh and the other on the opposite bank of the river. Hoping they will breed this year!
Whitethroat, 1 Lesser Whitethroat, Blackcap, Garden Warbler, Chiffchaff, Sedge Warbler and Reed Warbler.


Several Reed Buntings singing well and some Stock Doves cooing (at least that’s what I interpret it as) in at least 2 places. Also 3 Great-spotted Woodpeckers, 2 Grey Herons and a Kingfisher of note.
A couple of trips to Lollingdon Hill just turned up the local species, Corn Bunting, Yellowhammer, Linnet and Skylark.


Decided to take a look at Churn, when I arrived someone else had the same idea, as it was the young Roger Wyatt J. So for the next 2 hours or so we just stood there chatting and hoping for a decent Raptor to pass by. Roger did have a Peregrine shortly before I arrived and from then on it was Buzzards and Red Kites seen and a distant Curlew heard. Cheers Rog, good to see you!


A couple of Song Thrush frequenting the back garden again and several Pipistrelle bats around recently. 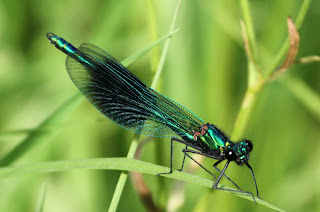 Banded Demoiselle
Posted by Oxonbirder at 22:02