Rain at first then overcast with a few very light showers.


Two distinct peaks with migrants today, the first early shortly after the rain stopped then another around midday. Hirundines featured again today but less numbers than yesterday. Swallows started coming in around 09:00 and continued until around 13:00 when it appeared to slow but still a steady flow.


The sea today was negligible, with no visible passage in the northeasterly breeze, only the local feeding movements of the Auks that breed on the West cliffs and 4 Common Scoter flew east.


A Hobby was seen plucking prey on a fence post near the Obs.


A Turtle Dove and a Cuckoo were in the Top fields early on and a Short-eared Owl seen.


The Little Owl still present in a nearby quarry.


200+ Swifts seen throughout the day.


Another good passage of Swallows, probably around 5000, along with 100+ House Martins and 10+ Sand Martins seen.


3 Yellow Wagtails,9 Redstarts, 50+ Wheatears, 8 Whinchats, a Stonechat seen and a Ring Ouzel in the fields up to Southwell.


Chiffchaffs, Willow Warblers, Whitethroats and Blackcaps made up the most of the warbler passage, also 2 Garden Warblers, 2 Lesser Whitethroats, 4 Sedge Warblers and 2 Reed Warblers.


2 Raven also seen in the afternoon flying down to the bill.


At 16:50 this afternoon all the Gulls  at the bill took to the air and an Osprey was seen coming in off the sea, a quick phone call to the warden who was at home managed to get a photo of it as it dropped lower as it moved up the island and was seen to be carrying a fish!


18:16, just four of us sat in the Obs lounge when a “ringtail” Hen Harrier flew in heading west! 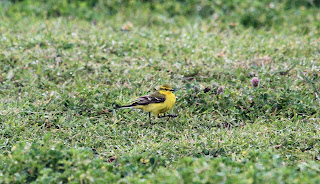 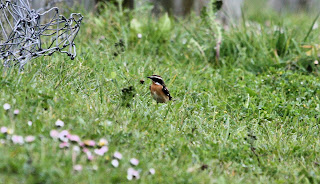 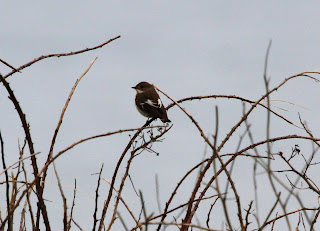 Pied Flycatcher
Posted by Oxonbirder at 21:52