Buntings, an Owl and a Warbler


After a busy day decided to go to Cholsey marsh to check the roost and was rewarded with some good birds!
One hundred and twenty plus Corn Bunting this evening, visibility was good and they were coming in from all angles, flocks of between five and fifty. Some behaviour noted, whether this is an anti predator strategy or not the buntings would fly over the roost site and settle in trees up to five hundred metres away and wait until the light was waning before going to roost!


Approximately twenty Reed Bunting, five Meadow Pipit all roosting in the reeds and surprisingly six Starling seen to go in also. A small number of thrushes, less than one hundred roosting in some of the trees on the marsh, Blackbird, Fieldfare, Redwing and Song Thrush.
At least three Water Rail heard and a Cetti’s Warbler seen and heard and a Barn Owl hunting over the marsh briefly, the first for a long time, unfortunately by the time I got to my car to get the camera out (I had only just put it away) it had gone.


Two Cormorant flew upriver and again large numbers of corvids (500+ Rook and Jackdaw) roosting a few kilometres away.
As the weather has become milder recently fewer birds have been visiting the garden, however a Treecreeper still daily along with the Great-spotted Woodpecker, Stock Dove and variable numbers of Long-tailed Tit to name but a few. 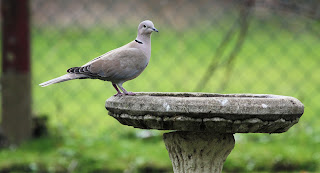 One of the regular garden visitors, Collared Dove.
Posted by Oxonbirder at 21:11