Sunny at first then overcast and rain, 7º, light to moderate WSW.


Ventured out close to home this morning and saw more people than birds but that is the holiday season for you!
The garden was more productive though, several Lesser Redpoll turned up on the feeders with around a dozen Goldfinch and three Greenfinch and around fourteen Chaffinch feeding on the grass around the feeders, the odd Blackbird visiting and feeding on the sultanas along with a Song Thrush and a ♀ Blackcap that appeared today (possibly Richards as he lives just over the road).


Several Wood Pigeon, three or four Collared Dove and a Stock Dove on and off through the afternoon, a Great-spotted Woodpecker and a Treecreeper noted, regular Blue and Great Tit and one or two Coal Tit and several Long-tailed Tit all visiting and the usual Robin, Wren and up to three Dunnock present.
I have an update on some birds at South Moreton today from Michael Pocock, around one thousand Lapwing and up to one thousand six hundred Golden Plover and a count of twenty-three Common Snipe.


Also three Blackcap (2♀ & 1♂) feeding in a garden near Queens Road for the past two weeks, also nine Blue Tit today.
Thanks for the info Michael. 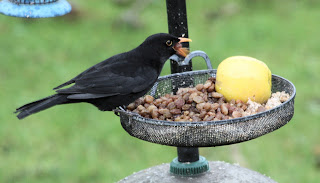 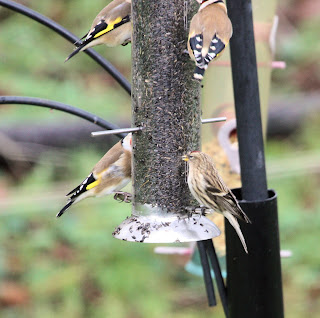 A poor pic of one of the Redpolls, apologies!
Posted by Oxonbirder at 22:22