Overcast, 10°, light to moderate SW.
Out over the farmland again today but slightly north from the last few days a more open area and not so waterlogged, however streams and ditches very full.
Again lots of Lesser Blackback Gull and Black-headed Gull feeding in the fields and plenty of Fieldfare and Redwing in the area.
A couple of small flocks of Yellowhammer and quite a few Blackbird (50+) and Song Thrush (20+) along the hedgerows, two Common Snipe and a few Skylark noted.
Two Stonechat seen, they have been in the area for a while now but not always visible from the footpaths, also a Peregrine seen alighting on one of the pylons.
A couple of Bullfinch in the millennium wood again.
Two Mistle Thrush seen along Church rd and a Coal Tit singing and both eventually turning up in the garden a little later, the Great-spotted Woodpecker, Stock Dove and a Treecreeper also frequenting the garden today along with other regulars.
The fields just North West of Cholsey hill at South Moreton are very waterlogged again with many gulls present and in excess of one thousand Lapwing there in the past few days, also several small flocks of Golden Plover but not sure of numbers involved. Thanks to Tony Williams for some of the info. 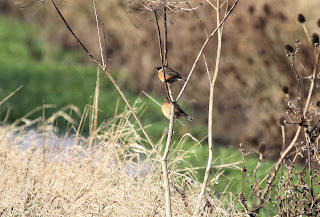 Stonechats
Posted by Oxonbirder at 21:30

Email ThisBlogThis!Share to TwitterShare to FacebookShare to Pinterest
Labels: Stonechat