Details of the breeding female Mute Swan on the brook, from the Thames Swan Uppers. It was ringed as a cygnet in 2003 at Shillingford, and has since been breeding around Goring/Beale Park but last seen in 2014 with a ringed male. So she's got a new mate since then and has relocated about 10 km to Cholsey.

Chris Perrins of the EGI in Oxford (Edward Grey Institute of Field Ornithology) has asked for reports on the progress of the cygnets (any fledging), but they have not been seen since they swanned past the garden on Sunday 28th May, so if anyone bumps into them over the next few months then please let us know how they're doing and it will get reported back to Richard who will pass the information on to Chris. The female is ringed, left leg, white colour ring with black lettering: L2K.

Thank you to Richard Broughton for the information and the photo. 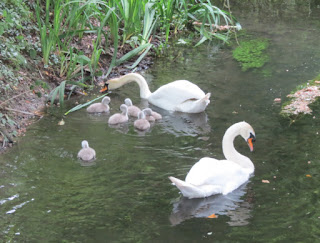