Overcast, 0º, intermittent snow showers but a thaw is happening.


At last, I caught up with the Shrike, I joined Bob Wyatt down at Cholsey marsh and later a few others joined us. We learned that it been seen around 13:00 by Peter Law but no sign until around 15:45 it appeared in the tree tops a fair distance away. As it was snowing, I had put the camera away so had to dash back to the car, get the camera, grab a few shots (almost on the run) and get back to where we were viewing it and typical........it flew off and chased some Redpoll, but at least we had finally seen it.
It then appeared about fifteen minutes later in the top of a tall Alder and then disappeared again after a couple of minutes. A very elusive bird!


The Cetti’s Warbler seen briefly and heard calling and the usual Water Rail calling at dusk and a ♀ Sparrowhawk flew through, three Great-spotted and one Green Woodpecker seen.
Two hundred plus Corn Bunting present at the roost this evening and there is certainly more than one roost site with another on the other side of the river, again in Phragmites! The vast majority though in the usual spot. With these numbers of Corn Bunting turning up here, it has to be a major site for this species in this area of Southern England!


Again twenty plus Reed Bunting roosting and a couple of Meadow Pipit.
A Mistle Thrush dominating the garden this morning and being very possessive of the sultanas much to the annoyance of the Blackcap, the three Robins and Song Thrush that were feeding on them. A couple of Redwing and Fieldfare early on but then left. 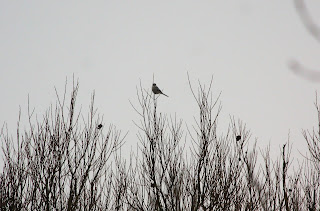 Distant photo of the Shrike 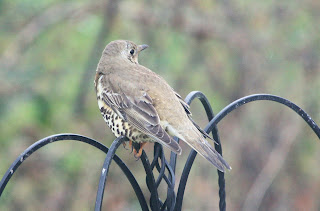 Mistle Thrush in the garden 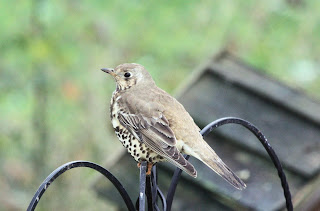