Cloudy, 4º, light NNW, cooler, back to winter next week with snow forecast.

A couple of unexpected visitors to the garden today, two cock Pheasants appeared early afternoon and stayed for the rest of the day and a Rabbit made a brief appearance. Pheasant has been seen in the adjacent meadow before but not in the garden and the Rabbit is a first; the Rabbit now makes twelve mammal species seen in or from the garden.

Other birds in the garden today were several Lesser Redpoll briefly, two Stock Dove, a Song Thrush and another brief visit from a ♀ Blackcap, ten plus Goldfinch and over a dozen Chaffinch and there were two Magpie present in the front garden.

An adult ♀ and a juvenile ♀ Muntjac Deer in the garden again this evening, the juv being about one third smaller and paler (esp on the nape and upper back) than the adult.

Some news from the South Moreton floods recently were of up to one hundred Common Snipe and a single Jack Snipe seen, a Ruff and a Dunlin also noted and again up to a thousand Lapwing and similar numbers for Golden Plover.

Also four Raven (two pairs) in what could have been a territorial dispute in Cholsey recently.

Thanks to Michael Pocock, Tony Williams and Geoff Wyatt for information. 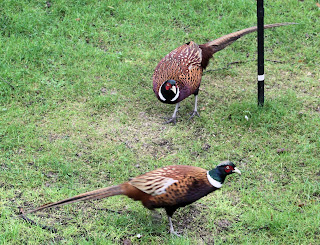 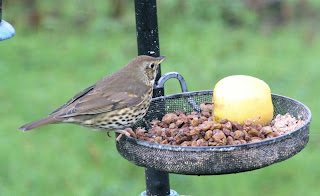