Overcast (again), 0º, no wind! Where has the weather and the sunshine gone!


Great Grey Shrike again on the Cholsey side of the Thames at Cholsey marsh late this afternoon but distant as usual.
Most impressive though was a count of 387 Corn Buntings that came into the roost this evening, in fact so many that they were roosting on parts of the marsh that they do not usually use. We estimated that the roost held roughly 2% of the British population of Corn Bunting!

The marsh itself is quite frozen over at the moment with very few areas that are ice free and water is still draining from the marsh into the river in a few places.


N.B. If visiting Cholsey Marsh for the Shrike late afternoon, please avoid disturbing the roost on the marsh. The Shrike (if about) can be seen from Ferry Rd. Thank you
Just a note from outside of Cholsey: There is a Common Buzzard I see quite often along the A417 Between East Hendred and Ardington “Hendred straight” that has a very striking white breast; it stands out like a beacon in the hedgerow. Anyone else noted this? 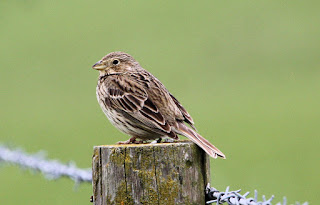 Corn Bunting from last year on Lollingdon Hill
Thanks to Michael Pocock for the Bunting count.
Posted by Oxonbirder at 19:16