Was at the gym in Abingdon today so when finished decided to visit Thrupp Lake at Radley and a quick look at some of the other water bodies there as it was not too far away.
Quite a few duck species there which included Mallard, Pochard, Teal, Wigeon, Tufted Duck, Shoveler, Gadwall, and a ♂ Pintail, also a Chiffchaff seen & heard feeding in the bank side trees.


Cormorant, Great Crested and Little Grebe, Mute Swan, Canada and Greylag Goose all present.
The river level has dropped substantially in the last week, still high and running fast for the Thames but mainly contained within its banks, the riverside paths still very muddy and wet.


A late visit to Cholsey marsh proved fairly routine apart from one sighting, around one hundred Corn Bunting at the roost and twenty plus Reed Bunting and approximately six Yellowhammer also roosting but not in the same area as the Corn Bunting.
Several Water Rail heard and just after 16:00, a Merlin flew through and headed upstream towards the Bow bridge area, also a Kingfisher flew upriver.


At least two Song Thrush singing at dusk and several Bullfinch heard calling.
A large corvid (Rook and Jackdaw) roost seen distantly well over five hundred birds not sure what side of the river they were on and quite a few Fieldfare and Redwing roosting in trees around the marsh.

A pair of Gadwall and two Coot in the background 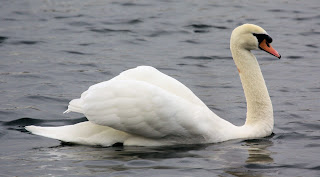 Mute Swan
Posted by Oxonbirder at 20:44