Sunny, 8º, no wind, a later start today and some nice sunshine though a bit cooler and temperatures dropping below zero tonight.


A walk out to Lollingdon hill and back, still muddy but floods subsiding, a lot of ditch clearing and hedge cutting recently along the field margins.
A Kingfisher along one of the cleared ditches probably looking for any larvae etc that may have been exposed!


A Grey Heron on one of the flooded fields, several Pied Wagtail present and both Green and Great-spotted Woodpecker heard.
Lollingdon Hill was quite busy with two Raven over, at least one Jay present, twelve plus Long-tailed Tit foraging in the Hawthorns on the south side.


The south slope held forty Starling, one hundred plus Fieldfare, twenty Redwing, two Mistle Thrush, a Song Thrush, five Meadow Pipit, five Corn Bunting (including one in song), thirteen Pied Wagtail, five Yellowhammer and three Goldfinch. Why so many birds on the south slope I am not sure, maybe the Sheep being present and also insects around had attracted the birds.
In addition, a flock of fifty Linnet on the top field and two Lapwing flew over.


At one point everything on the south side of the hill scattered, they saw something that I did not I scanned the area for around five minutes but saw nothing untoward. The reaction of the birds indicated something like a Merlin, Peregrine or Sparrowhawk had been seen.
A couple of Roe Deer noted.
A flock of over five hundred Lapwing seen over Haddon Hill whilst driving back from Didcot to Wallingford this afternoon and two Grey Heron in the flooded fields at South Moreton at dusk.


The ♀ Muntjac Deer in the garden again this evening and a Treecreeper and Great-spotted Woodpecker present during the day. 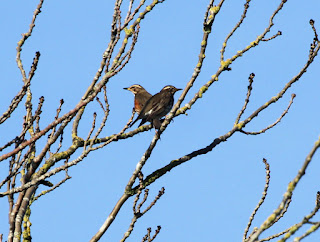 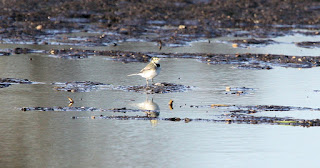 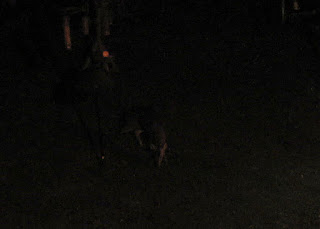 Starling, Fieldfare and a Yellowhammer
Posted by Oxonbirder at 21:00