Three Warblers species today, Chiffchaff, Blackcap and Cetti’s all seen, interestingly there is also a Pallas’s Warbler present in nearby Berkshire at the moment.
A quick visit to Thrupp lake, Radley as I was in the vicinity, the usual Mallard, Tufted Duck, Teal, Pochard, Shoveler, Gadwall, Wigeon, Mute Swan, Great Crested and Little Grebe (3), Cormorant, Coot, Moorhen, and many Black-headed Gull, a Chiffchaff still present also.


Had a check on the roost at Cholsey marsh and around a hundred Corn Bunting again but not all roosting on the marsh!
A ♂ Sparrowhawk flew through and the Cetti’s Warbler still present, heard calling then seen but very active, tried to get a few pics but it would not stay still long enough, (let’s hope this cold snap is short lived). At least two Water Rail heard and a couple of Meadow Pipit present. No other buntings seen or heard this evening, several Bullfinch present.


Quite a few Redwing still roosting in the trees on the marsh along with a few Fieldfare and the resident Blackbirds.
The ♂ Blackcap seen in the garden early morning today.


Email comments from Bob Dryden, “Regarding Blackcaps, we have had a ♂ and a ♀ feeding at our bird tables every day since Friday (11th Jan). We have had a pair turn up for the last three or four years now. We have also had four Reed Buntings on the tables and again they have arrived each winter for many years now. Last year numbers were up to at least six (3 ♂ & 3 ♀) – could be more but six was the maximum at any one time.”
Thanks Bob.


Further to Bob’s comments on Reed Buntings, when I lived in Wallingford Reed Bunting would turn up every winter. Usually mid January but a few in December sometimes, then through until March (occasionally April) when they would peak in numbers (maxing to sixteen in several years but always in double figures), and then disperse to breeding areas towards the end of the month depending on weather conditions. In 2005, Reed Buntings turned up on the 9th Jan and at least one was still present on the 6th June. 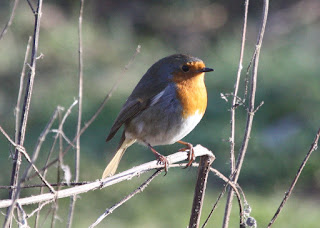 Pochard, Black-headed Gull and a pair of Gadwall 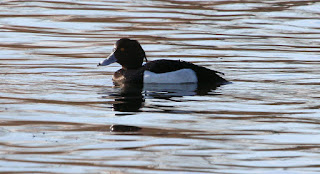 a few of the Corn Bunting prior to roosting
Posted by Oxonbirder at 21:07