Another walk out to Lollingdon today was somewhat quieter than earlier this week. Still a lot of Thrushes around with Redwing being in the majority with many feeding in the soggy grassy fields, a hundred or so Fieldfare and the same with Blackbird but they were more distributed whereas the Fieldfare were in flocks. Also thirty plus Song Thrush noted (two in song closer to the village) and all feeding close to hedgerows and a couple of Mistle Thrush seen.
Four Bullfinch seen also four Common Snipe and four Teal all in the same flooded field, Goldcrest heard but not seen!
Several Skylark and Yellowhammer around but no sizable flocks noted apart from the fifty or so Linnet on the top field of Lollingdon hill.
A Grey Heron on the roof of an outbuilding at the Manor house overlooking the pond presumably to get a better view. 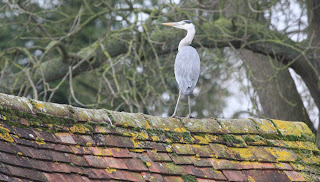